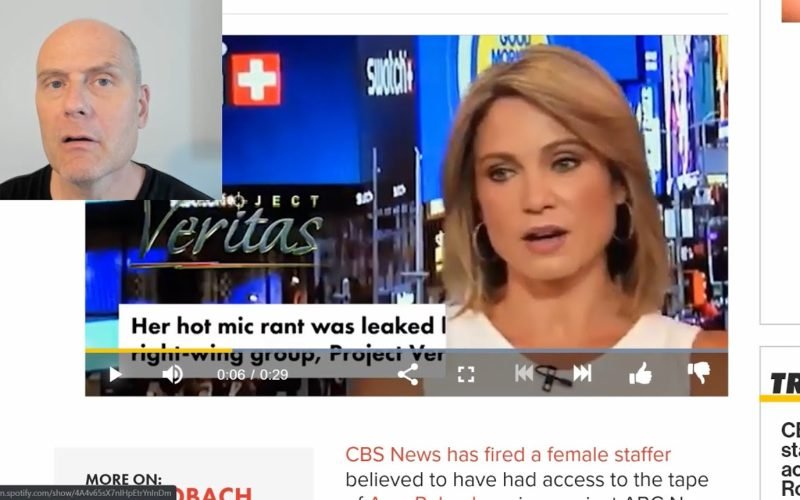 “CBS News has fired a female staffer believed to have had access to the tape of Amy Robach raging against ABC News, Page Six understands.

“We reported on Wednesday that ABC News chiefs discovered a former employee could be behind the leak of the damning footage of Robach slamming the network for shelving her interview with Jeffrey Epstein’s “sex slave” Virginia Roberts Giuffre. Sources told Page Six that a former staffer had access to the footage of Robach as she aired her frustrations over a hot mike — and that employee was now believed to be working at CBS.

“A TV source told us later on Wednesday that the woman was let go from CBS, after ABC execs alerted the rival network.

“ABC sources confirmed to us that they’d informed counterparts at CBS about the staffer “as a courtesy.”

“As we reported, it is not known whether the woman leaked the tape, which was recorded in July, to the Web site Project Veritas, or may have showed it to others who passed it on.

“A CBS spokesperson declined to comment on the matter.

“An ABC source had told us earlier Wednesday that the network was considering its options — but added that it was more difficult because the person no longer works there, but they did, the leak would be a “fireable offense.”

“An ABC rep commented: “We take violations of company policy very seriously, and we’re pursuing all avenues to determine the source of the leak.”

“In the leaked footage, Robach says Giuffre — who claims she was forced to have sex with Prince Andrew by Epstein — “told me everything.” But that ABC “would not put [the interview] on the air.” The network said the report didn’t meet its standards, and on Tuesday a top ABC producer told NPR: “We would never run away from that … We would never kill a story about Prince Andrew. That’s what’s ridiculous on its face. That’s a great story. So if we could do that story, we would have done it!”

Your support is essential to Freedomain , which is 100% funded by viewers like you. Please support the show by making a one time donation or signing up for a monthly recurring donation at: http://www.freedomain.com/donate