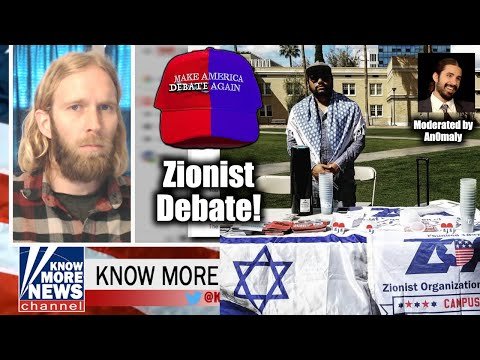 Respect! This will be an epic discussion about Zionism, Israel, Palestine & America hosted by An0maly on Make America Debate Again Podcast.

Antar Davidson is the Southwest Campus Coordinator for Zionist Org. of America. He’s also been on CNN & MSNBC recently talking about migrant camps. Also says he’s the first American to bring down a private prison CEO.

Adam Green is the host of Know More News channel on YouTube. His channel focuses on Zionism, Israel & it’s impact on not only the United States but on the entire world.

This “Make America Debate Again” podcast is on Apple, Google & anywhere to be found. Podcasts typically get uploaded a few days after they air on YouTube.
Apple: https://itunes.apple.com/us/podcast/make-america-debate-again/id1438462243?mt=2
Google Play: https://play.google.com/music/m/Iradvv5u7ulngjhw6lcokdbkda4?t=Make_America_Debate_Again