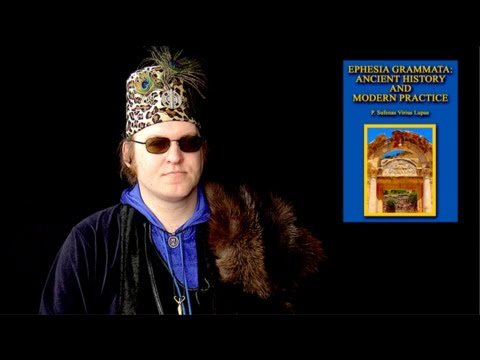 P. Sufenas Virius Lupus (his spiritual name) is a practicing polytheist and scholar. He is author of A Serpent Path Primer, Ephesia Grammata: Ancient History and Modern Practice, The Phillupic Hymns, The Syncretisms of Antinous, and other devotional books. Under his legal name of Phillip Bernhardt-House, he is author of Werewolves, Magical Hounds, and Dog-Headed Men in Celtic Literature. He is on the social science faculty at Skagit Valley College in Mount Vernon, Washington.

Here he notes that, in actual practice, polytheistic traditions are similar to those of the Catholic Church with its many devotional rites regarding saints. As certain humans are elevated to sainthood, so various polytheistic traditions have elevated other humans to the status of deities. Ancient Roman and Greek polytheism also included elements of satire – and even materialism. He, personally, maintains a clear distinction between the Jungian notion of archetypes that psychologists often associate with the pantheons of ancient religions and the living presence of willful, non-corporeal entities that are the foundation of polytheistic engagement.

New Thinking Allowed host, Jeffrey Mishlove, PhD, is author of The Roots of Consciousness, Psi Development Systems, and The PK Man. Between 1986 and 2002 he hosted and co-produced the original Thinking Allowed public television series. He is the recipient of the only doctoral diploma in “parapsychology” ever awarded by an accredited university (University of California, Berkeley, 1980). He is a past vice-president of the Association for Humanistic Psychology; and is the recipient of the Pathfinder Award from that Association for his contributions to the field of human consciousness exploration. He is also past-president of the non-profit Intuition Network, an organization dedicated to creating a world in which all people are encouraged to cultivate and apply their inner, intuitive abilities.

The Afterlife and the Unconscious with Stephani Stephens
The Mysterious Component of Reality with Edward R. Close
Paranormal Experiences in Psychotherapy with Paul J. Leslie